In this week’s Employee Spotlight, we are taking the opportunity to get to know a familiar face who recently received a new title here at Tilghman Beach and Golf Resort!  Tanya Chadwell has been with us for almost six and a half years!  She applied for a position as a Housekeeping Supervisor as a second job but found herself liking things so much at Tilghman that she left retail management to work for us full time.  From there, she became so knowledgeable of our condos that she was promoted to Homeowner Representative in 2014 and just last week she joined the ranks of being a Front Desk Supervisor as well!  Now, homeowners, don’t fret, these new responsibilities will be added on to all that Tanya does for Tilghman!

Tanya attended high school locally and then went to college in Harrison, VA to become a medical assistant.  She has also owned her own cleaning business and pierced many ears during her time working as a manager at Claire’s jewelry.  But, as anyone who has received her assistance here knows, Tanya thrives in a small business hospitality setting.

Her life outside of work mostly revolves around her beautiful family.  She is a wife and mother of three who enjoys baking in her spare time, in part to satisfy her sweet tooth, which she cites as her biggest vice.  Ice cream and soft chocolate chip cookies are a guaranteed win if you are looking for a way to thank Tanya for her hard work.  Her favorite game to play with her children is Disney Monopoly.   This is Us is the television show she has most recently binge watched.  If you get lucky enough to be invited to a potluck-style event that Tanya will be at you better hope she will make her loaded twice baked potatoes, because they are delicious!  And one final fun fact is that Tanya doesn’t burn or tan in the sun, she freckles!

Now that you know a bit more about Tanya, join us in congratulating her and wishing her the best in her newly expanded role as a Front Desk Supervisor! 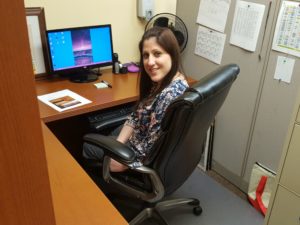 Looking for an unforgettable North Myrtle Beach vacation? Then look no further than Tilghman Beach and Golf resort, the ultimate North Myrtle Beach resort. With an unbeatable location, amenities package, and spacious condo accommodations, Tilghman Resort is perfect for vacations of any kind - from family vacations, golf getaways, weddings and beyond.