Nat and Peggy Campbell, from Ameherst, Va., have been spending their Octobers at Tilghman Beach and Golf Resort for the last three years.  They braved the rain that came behind Hurricane Joaquin in 2015 and held tight during Hurricane Matthew which brought torrential rain, 70mph winds, and a tornado to the shores of North Myrtle Beach, SC. on October 8th, 2016.  By Sunday morning the sun was shining, the ocean was tranquil, and the Campbells went for a walk on the beach to see what the storm had washed ashore.  Nat was standing ankle deep at the shoreline and saw something resembling a rock next to his foot.  What he found turned out to be a megalodon tooth that was over 5 inches long and in very good condition.

In the days following, the Campbells had the tooth verified by an aquarist at Ripley’s Aquarium at Broadway at the Beach in Myrtle Beach.  He estimated the tooth to be at least 1,000,000 years old and pointed out that since it is not known where in the jaw the tooth came from, the size of the megalodon could not be determined.  After this, the Campbell’s daughter-in-law reached out to The Sun News and this story has been picked up by multiple media outlets since.  Though Mr. Campbell had never even heard of a megalodon before one washed up alongside of him, a picture of the tooth he found was on the front page of a national newspaper within days of his discovery. 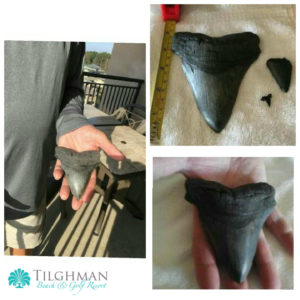 The megalodon is believed to have lived between 23 and 2.6 million years ago and is considered to be one of the largest and most powerful predators in vertebrate history.  Due to the fact that their skeleton was formed of mostly cartilage, rather than bone, teeth are the most common fossils found of this massive prehistoric sea creature.  Megalodons are commonly acknowledged to have been an average of 60 feet long though fossil remains have indicated they could get as big as 78 ft., or about 24 meters.  Paleontologists believe their jaw could have been up to 6.6 feet wide and contained, on average 276 teeth within 5 rows.  The largest tooth ever found measured over 7 inches long.  Megalodons were at the top of the oceanic food chain during their time and used their extremely serrated chompers to eat whales, dolphins, pinnipeds such as sea lions and sea turtles.  The reason for their extinction remains unknown though it is usually attributed to a combination of ocean cooling, decline in food supply and a drop in sea level. 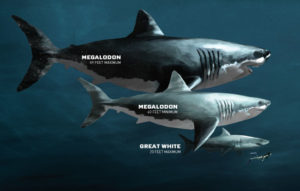 Mr. Campbell’s find was extremely rare, though not the first of its kind in our area.  Two similar teeth were found in June of 2015, about a mile from our hotel at the Cherry Grove Pier by a 9 year old girl on vacation.  Searching for shark teeth is a beloved hobby of tourists and locals alike.  Though some purchase sand strainers at beach shops, Nat Campbell fashioned his own using a tea strainer attached to a golf club with gorilla tape.  With 2 weeks left in their stay the Campbells have found almost 400 shark teeth on their daily walks and Peggy estimated that her brother-in-law, who also arrived on October 1st, has collected nearly 1,000.  Nat and Peggy’s plans for when they return home is to display the tooth in a shadow box and to look forward to what they might find when they stay at Tilghman Beach and Golf Resort next October.