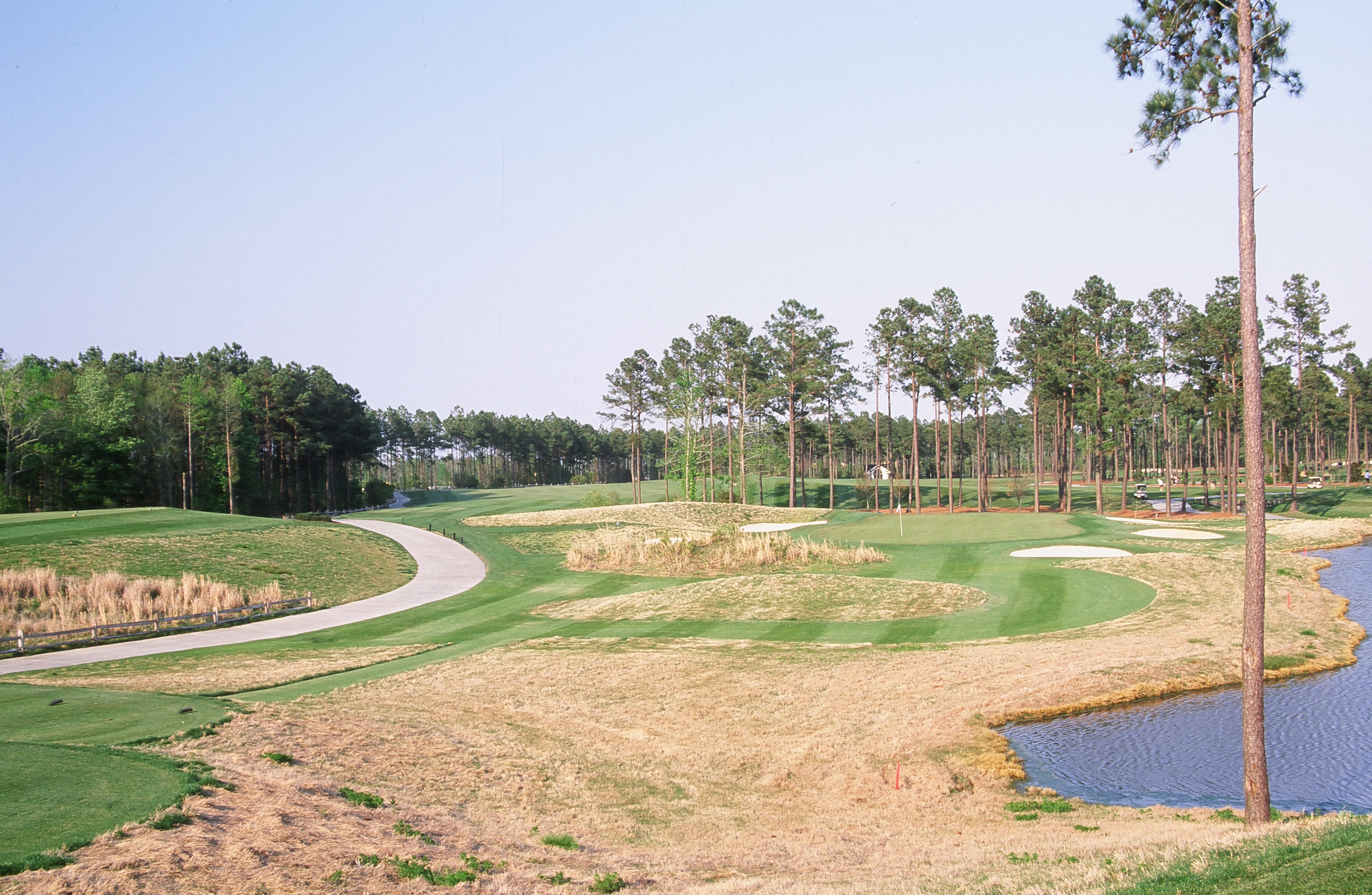 Book 4 rounds on any of the 22 Founders Club Golf Courses and each golfer will get a $100 rewards card, which can be used however the golfer chooses in each of the clubhouses on food and beverage and/or merchandise. Four rounds must be booked to receive these discounted rates and $100 rewards card.

Your package includes 4 rounds of golf on any of the Founders Club Golf Courses, a $100 Prime Time Reward Card, and a 4 day/3 night stay in a golf and lakeview condominium at Tilghman Beach and Golf Resort where you wake up to mornings overlooking Tilghman Lakes & the Surf Beach & Golf Club.

Burning Ridge Golf Club – At 6,780 yards, the course features elegantly mounded, pine tree-lined fairways planted with Bermuda-419. Elevated TifEagle Bermuda greens boast velvet smooth putting surfaces and are protected by water hazards or bunkers. There are quite a few water hazards on the course, mostly creeks dividing the course from the surrounding neighborhood, but most of the water is lateral, with only a few forced carries. On the back side, you’ll probably face two forced carries, #12 and #17, to peninsula-type greens. Those are also among the most picturesque postcard-worthy holes on the course.

Colonial Charters Golf Club – The Colonial Charters 18-hole, par 71 course is a friendly Myrtle Beach golf course and a pleasure for golfers of any skill level to play. It will challenge you while providing a relaxing, picturesque wooded backdrop.

Founders Club at Pawley’s Island – Known as a difficult but fair par 72 course, Founders Club at Pawleys Island features 18 uniquely designed holes that measure a total of 7,007 yards. Five sets of tees allow players to choose their level of difficulty. It can be a fair challenge for the average golfer, but anyone can have a fun and satisfying game, whether you are a scratch golfer or a 25 handicap. The course is not especially long, but is strategic, which brings players back again and again to try different approaches.

Indian Wells – Plan to have a lot of fun but wear your thinking cap while facing down big oak trees in odd places, doglegs and water hazards – 14 water features total. But even “average” golfers have a strong shot at scoring well. You might feel challenged, but you’ll enjoy the experience.

Myrtlewood – Palmetto – This Myrtle Beach course features long wide fairways dotted with plenty of fairway bunkers and lots of water, including holes along the Intracoastal Waterway.

Myrtlewood – Pinehills – The skillful use of mounding and strategic placement of water hazards makes the Myrtlewood PineHills golf course a modern masterpiece of beautifully contoured fairways.

Pawleys Plantation Golf and Country Club – Another Nicklaus design, this course overlooks expansive salt marshes and features obstacles of some type on every hole. It’s also home to what may well be the most despised hole along the Grand Strand, the par-3 No. 13 that measures a mere 40 yards from the front tees and 145 from the back and requires a shot over marshes to a tiny flat green.

Pine Lakes Country Club – Closed for three years in the early 2000s for a $15 million renovation that restored the course and its stately Southern colonial clubhouse, there’s a sense of history and tradition found here that few other courses match.

River Club – On a plantation site, this Tom Jackson course in Pawleys Island features water in play on 15 holes with the par-5 18th voted by locals as one of the Grand Strand’s top finishing holes.

River Hills Golf Club – What makes the River Hills course like no other is that it is peppered with non-parallel fairways, rolling hills, and frequent 40-foot elevation changes. It is also unique in the sense that it has only one set of parallel holes: # 1 and # 10. You play out nine and play back in, ending at the clubhouse at the end of each nine. The 17th hole is considered the signature hole, with its double dog-leg par 5 and two water carries.

TPC Myrtle Beach – TPC Myrtle Beach was once host to the Senior PGA Tour Championship, won by Hall-of-Famer Tom Watson, and it remains the only Myrtle Beach golf course in the Grand Strand area ever to be awarded 5 stars by Golf Digest magazine. The prestige of the Tournament Players Club brand means that golfers can expect an exceptional experience.

Willbrook Plantation – This Pawleys Island course is built on the site of two former rice plantations and offers a mix of traditional and plantation styles. There’s lots of water in the form of waterways, lakes and wetlands and average-sized but challenging greens.

World Tour Golf Club – World Tour is the brainchild of golf course designer Mel Graham. His vision was to recreate 18 of the world’s most elite, renowned and challenging golf layouts from 15 courses in three countries and nine states. The result is an utterly unique golf experience – a trip around the world played on a course you’ll never forget!
Play the Open Nine, named for the most notable holes played during the British Open and the U.S. Open, or challenge yourself on the Championship Nine, named after holes inspired by all four men’s major championships: The Masters, U.S. Open, British Open, and PGA Championship.

Your accommodations will include a 3 bedroom/3 bathroom condo, with 1 king sized bed and 3 queen sized beds so each golfer has their own bed.  Each condo has a large private balcony, fully equipped kitchen, separate living area, flatscreen televisions in every room and a washer/dryer.

Looking for an unforgettable North Myrtle Beach vacation? Then look no further than Tilghman Beach and Golf resort, the ultimate North Myrtle Beach resort. With an unbeatable location, amenities package, and spacious condo accommodations, Tilghman Resort is perfect for vacations of any kind - from family vacations, golf getaways, weddings and beyond.